This is a guest post from Benjamin Brandall. Benjamin is a content marketer at Process Street, where he writes on startups, SaaS, and workflows. In his spare time, he runs Secret Cave, a site covering obscure entertainment and internet culture.

Ever wondered about the exact methods successful SaaS companies use to close deals with big companies?

A recent study we conducted in partnership with sales emailing tool PersistIQ analyzes the sales sequences of 281 top SaaS companies, and collates their emails and voicemail transcripts in an archive.

In this post, I’m going to pick apart the genuine sales sequences of Salesforce, New Relic, and Intacct. According to Montclare, all of these SaaS companies are among the top 100 in the world; Salesforce is #1, and New Relic is #6.

In part, that’s because these companies create incredible products, but their successes can also be attributed to their tight sales processes.

How many emails is too many? What’s the main thing to communicate when selling to a new lead? How do you create copy for follow-up emails? How do calls and voicemails tie into the follow-up sequence?

A note on how we collected the data

Using the details of a fictional Vodafone employee, we signed up for free trials of 281 SaaS products. These products were listed on Monteclare’s SaaS 250, a list of the top 250 SaaS companies.

The first and only interaction we had with the companies was filling in an online form. After that, we simply logged all of the follow-ups and voicemails to create an archive of sales communications that we have now collated as a microsite, Inside SaaS Sales.

This means that what you’re seeing is how sales teams would chase a super wealthy lead that’s presumably too busy to respond — sound familiar?

Now, join me as I tear down the sales cadences of Salesforce, New Relic and Intacct.

Salesforce is one of the first companies to bring versatile sales software into offices previously tied down by restrictive contracts from on-premise software vendors. It’s also one that’s perfected the art and science of sales itself, with a market cap of $25.5b that makes it the most valuable SaaS company in the world.

The sequence starts with two automated marketing emails. The first email welcomes the new signup and asks them to log in to see walkthroughs, and the second email is sent 15 minutes later to request account verification.

The next morning, our lead gets an email from an enterprise sales specialist with an offer to set up a 5-10 minute call. A call of this length is much less likely to be a demo than it is to be a qualification call. The salesperson wants to make sure the request is serious and viable before pursuing it, and is also trying to find a specific need to address. 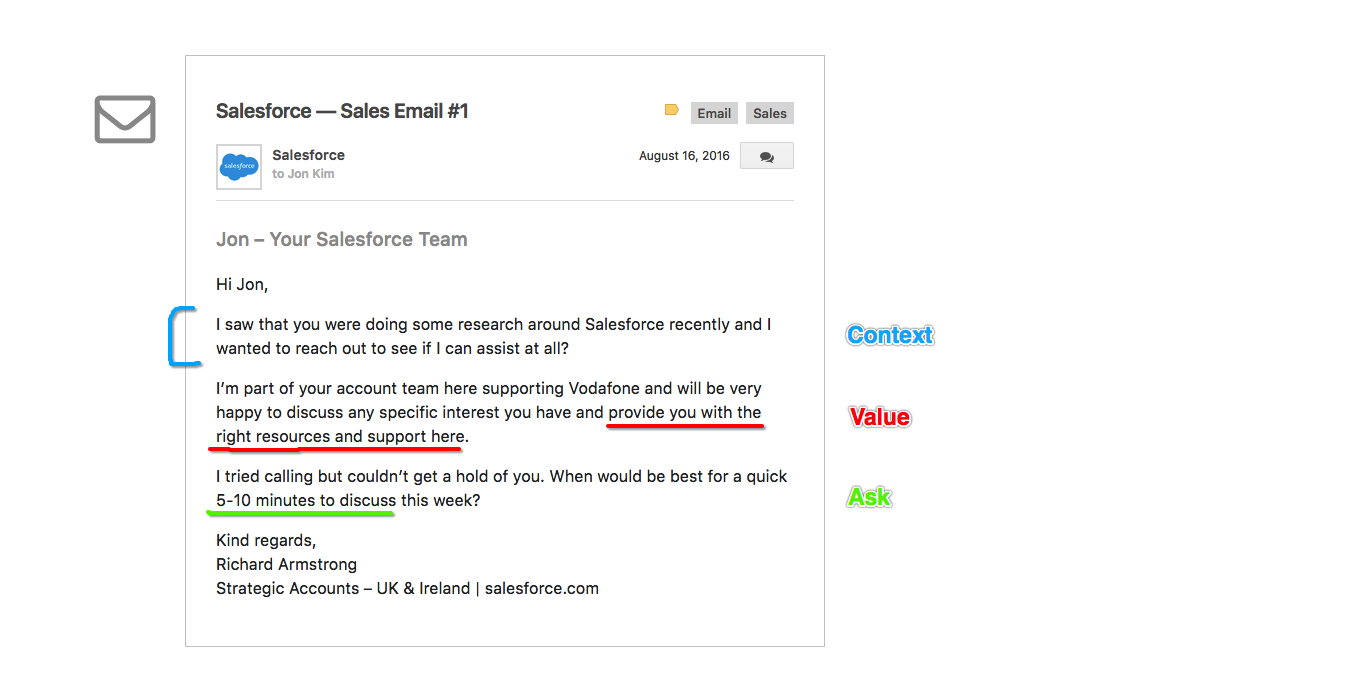 From the emails we analyzed in this study, we found that the most common way to open email correspondence is with context. Phrases like “I noticed”, and “I saw” cropped up a lot, and are used as a way for a salesperson to show the lead that they’re not reading spam, they’re reading something relevant and familiar.

The Salesforce rep then goes on to offer value by saying they can provide the right resources and support before asking to arrange a 5-10 minute call. The email has a single motivation: to get a response. To this end, the salesperson makes the same ask twice. Once at the start (“I can assist at all?”) and once at the end (“When would be best for a quick…”).

A few hours later that same day, the marketing drip sequence sends an onboarding email offering a walkthrough for their Opportunity Management feature. 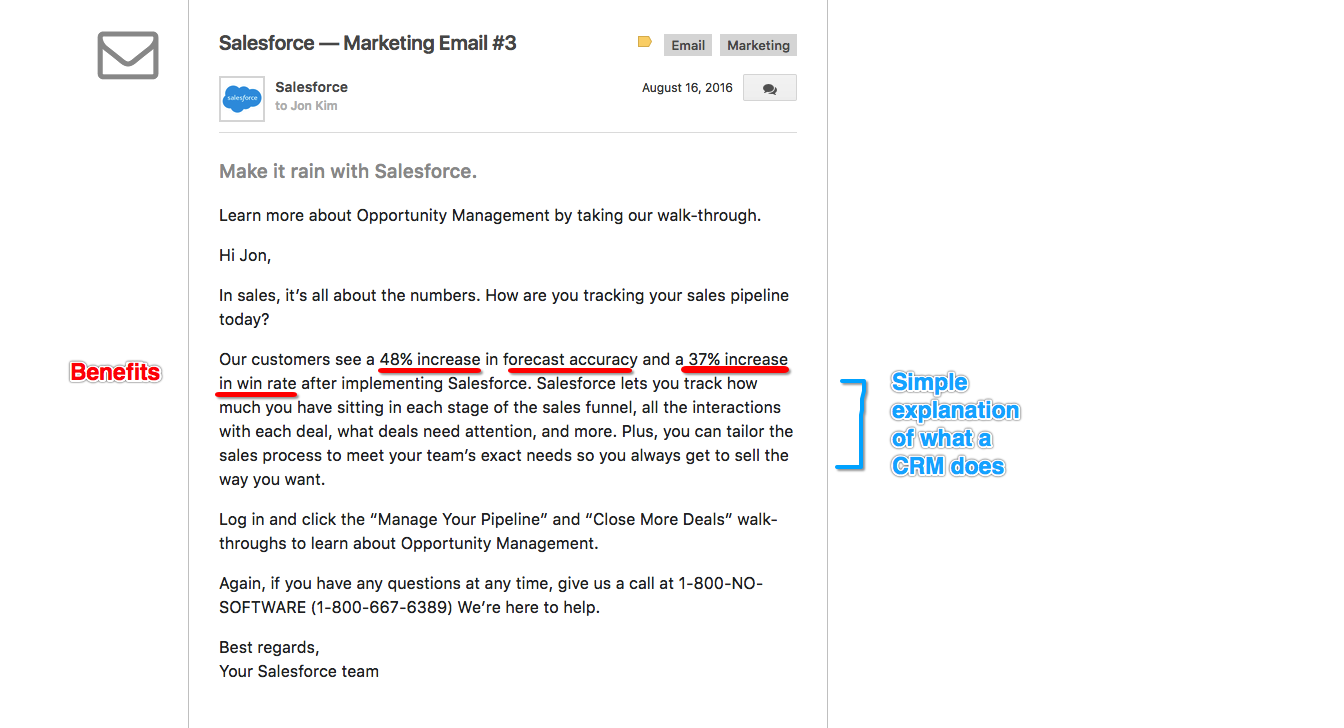 The email seems targeted at a user who is still unsure about how a CRM can help them. This is presumably because we didn’t log into the Salesforce account after signing up and Salesforce thought the lead was confused or disinterested.

To recapture the lead’s interest, the email promises at 37% increase in win rate and then goes on to explain simply how Salesforce helps sales teams achieve this. It ties these features to an ask at the end of the email that tries to get the lead into the app and learning about its key features. The core value of Salesforce will become clear to the user when they learn about the opportunity management feature (it’s an aha! moment), so that’s the path the onboarding sequence takes. 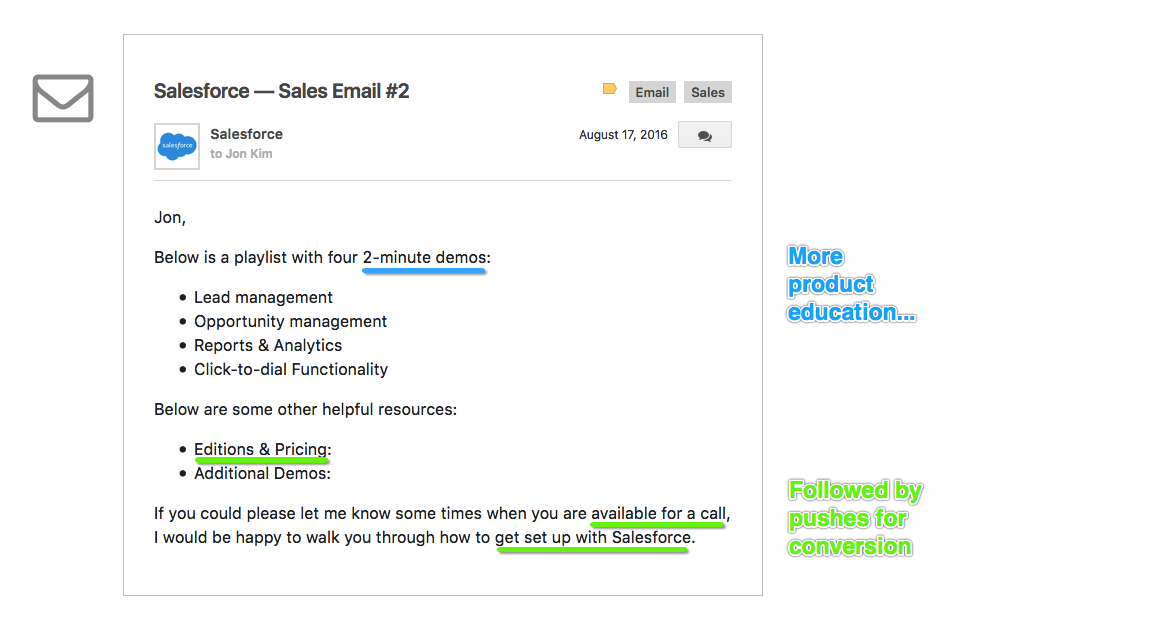 The next emails continue to educate the lead about the product by providing short video overviews of features, and keep pushing for a phonecall. You can read the rest of the sequence here, and see the product features Salesforce sells leads on.

Unlike some companies, which stop following up without notice, Salesforce sends a break-up email:

Break-up emails let the lead know that they’re not going to get any more emails from the rep. This is both a nicety (to explain why the file is being closed) and a ‘last chance’-style offer. Salesforce waited for 3 weeks after their last sales email before sending this and closing the file.

New Relic, a software analytics unicorn, filed for IPO in 2014 with a $1.42B valuation. It is one of the leading companies in its industry, and its follow-up sequence was one of the most persistent we analyzed.

Exactly the same as Salesforce, New Relic’s sequence begins with automated emails. The first email triggers on signup. It reiterates the benefits of New Relic, and provides links to documentation and training material. 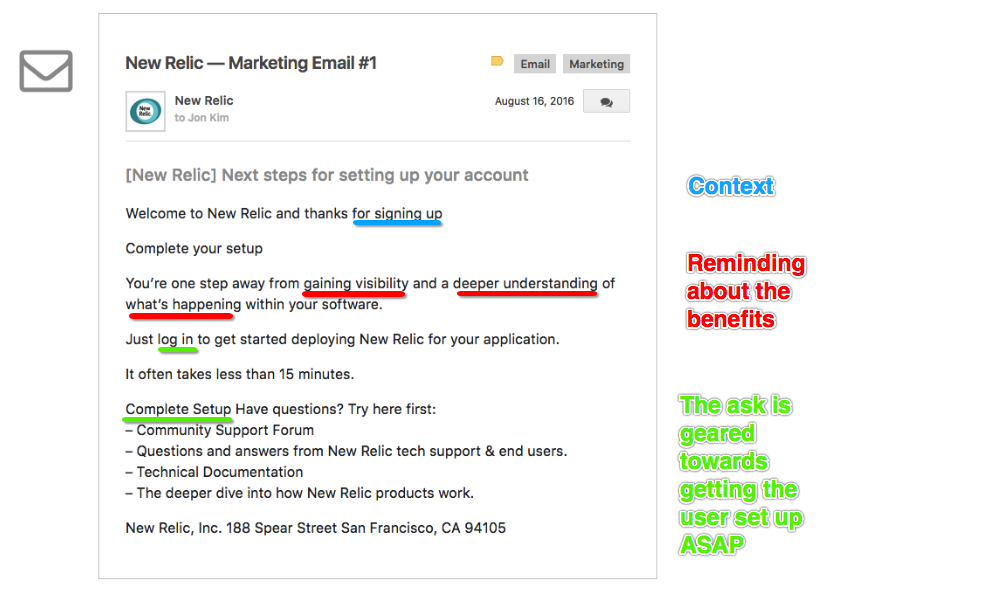 Since New Relic’s primary concern here is to get the user to set New Relic up for themselves, they ask twice in the email as well as providing preemptive support docs in case the user gets stuck. 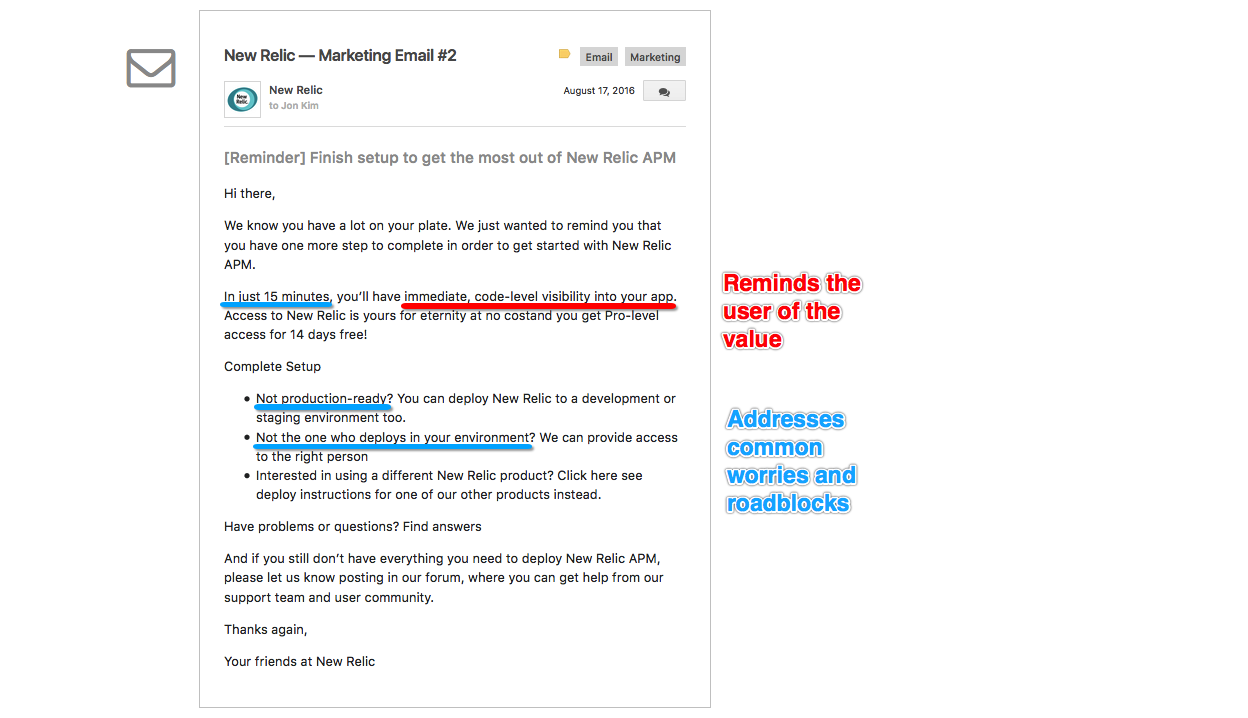 By analyzing customer feedback and their software analytics, it seems New Relic has found the most common roadblocks for new users and the most common reasons the user hasn’t logged in yet. They emphasize by saying they know we must be busy before re-iterating that the setup will only take 15 minutes and that support is readily available.

To motivate the user to spend 15 minutes of their time (and with the possibility that the user is evaluating many tools and has forgotten), New Relic again explains the value of their product.

The next day, we get put in touch with a sales development representative who provides similar information to the automated emails, and offers to schedule a kick-off call.

Now connected with an unresponsive lead, the SDR calls four times in the next day and leaves 2 voicemails.

At this point, New Relic wants to check whether or not the lead’s signed up for the right thing and makes them aware of alternative products they offer. After reiterating New Relic’s features and benefits, the SDR again asks for a quick call.

The 2nd sales email is the final email New Relic sent, but they did call twice again afterwards at one-week intervals to check in before finally closing the file.

The first email in Intacct’s sequence is automated, and designed to assign the lead to one of Intacct’s main segments: SaaS companies, nonprofits, services companies, other, and uninterested. This makes it easier to send the lead relevant marketing material, and gives the salesperson something to reference when they reach out.

Two days of inactivity later, an SDR calls to establish himself as the one who will help you research the best solution and to set expectations for his future follow-ups.

Intacct’s hidden pricing on its homepage hints at more of a high-touch sales process, so the presentation of a salesperson as someone to support research and work alongside the lead makes sense. 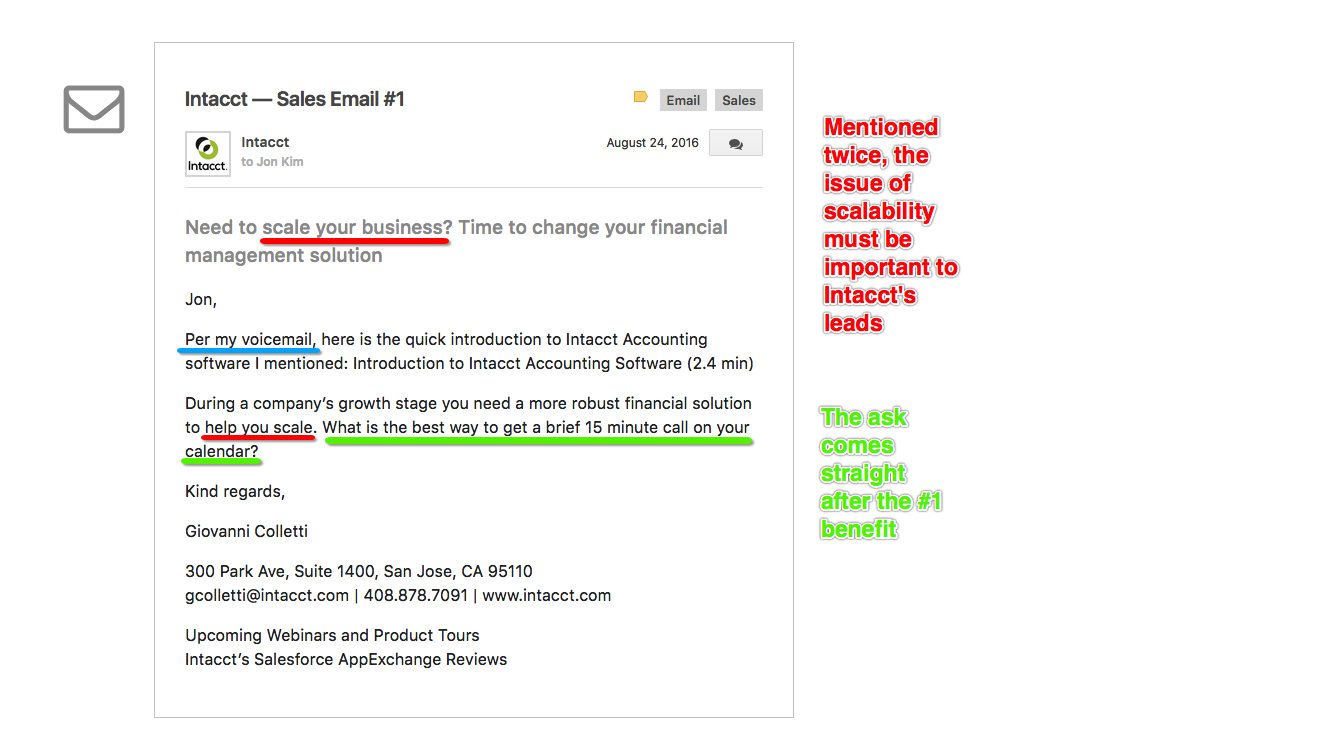 As time goes on, the language of the sales communication shifts from an offer to help with research to a more benefits-driven approach. The more time that passes without a reply, the more likely it is that a lead has forgotten what the product is or why they should care about it.

This is also evident in the follow-up voicemail that came a day later:

Intacct chains voicemails and emails together which always gives the SDR something to make reference to in the next touchpoint. Every voicemail is following up with the previous email, and vice versa. The pattern of 1 email and 1 voicemail each day continues, with each giving a little more persuasive information. The next predicts that the lead is also evaluating the competition, so links to a relevant case study. 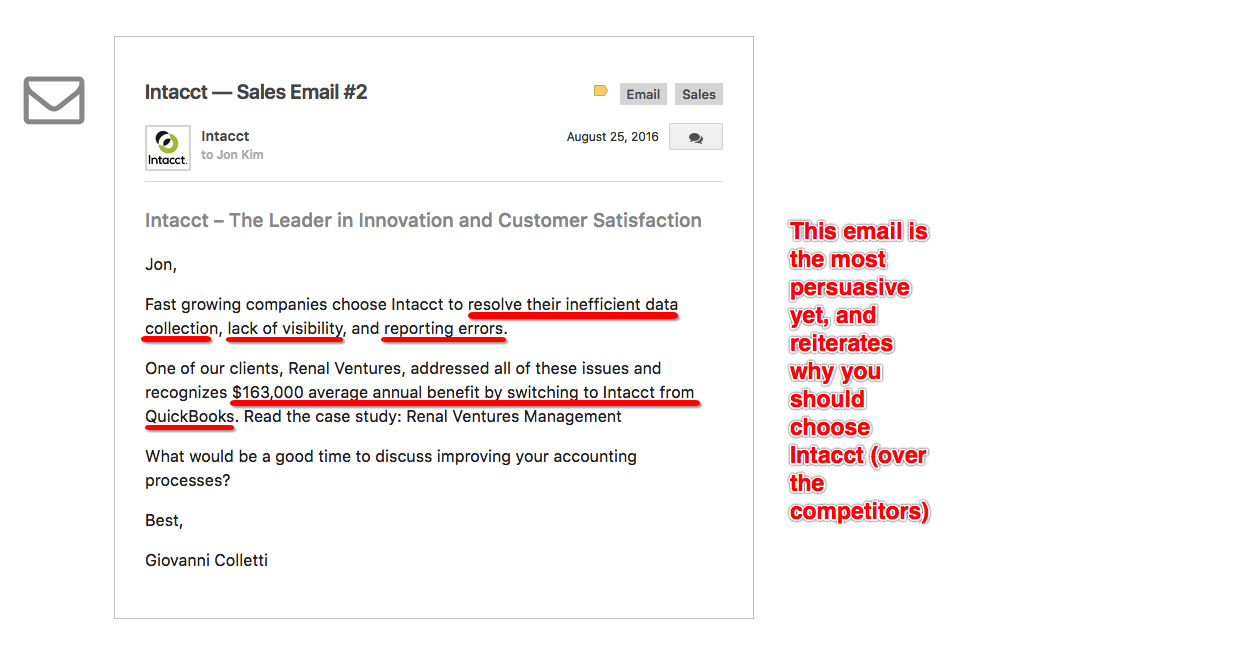 Case studies seem to be the most effective tools for selling to enterprises because they show how companies of equal size (and with just as much to lose by choosing the wrong solution) benefit from Intacct. The SDR sends another case study five days later, leaves the expected follow-up voicemail later on in the day, and then gives up.

The final email in Intacct’s sequence is an automated email that links to user reviews and agitates the issue of old, on-premises solutions. It even goes as far as to use Sage, now Intacct’s parent company, as an example of an outdated system. 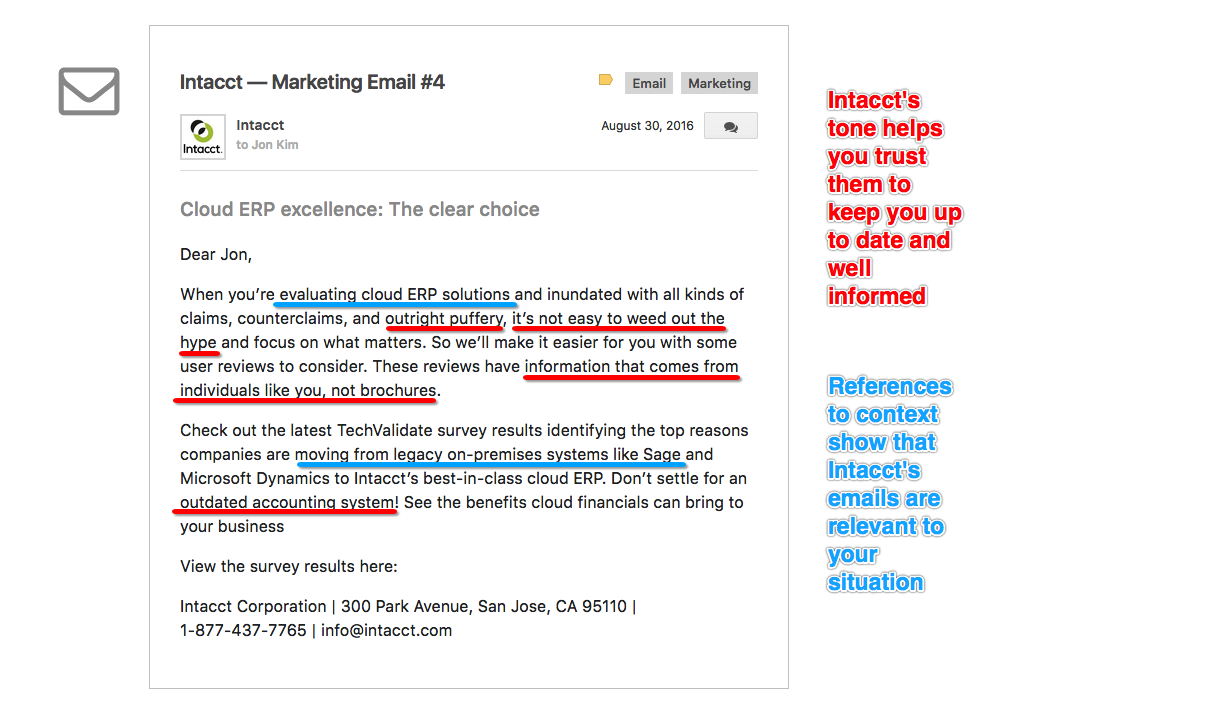 And, with a bang, the sequence ends. Intacct’s sales cadence is short (just 8 days compared to New Relic’s and Saleforce’s 24 and 29), but wastes no time with tight and contextualized voicemail follow-ups, and benefits-packed emails that appear to properly understand the lead’s situation.

Looking in-depth at the sales processes of these three companies, you can see:

To see the full sales sequences of 280 SaaS companies, read the full archive of emails and voicemails, and read more about the study, check out Inside SaaS Sales.